The Surprising Benefits of Athletic Mouthguards 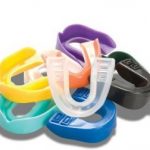 If you have an athlete in the family, then you’re probably acquainted with mouthguards. But did you know that they go beyond protecting your child’s teeth, tongue, cheeks and jaw? These mouthpieces have also been shown to improve strength, endurance and reaction time, as well as reduce athletic stress.

And they’re not just for football players, either. Those participating in volleyball, soccer, hockey and even triathlons can reap big benefits.

In fact, according to a study published in the Journal of Strength & Conditioning Research, an ArmourBite mouthpiece (available from sporting goods company Under Armour) can significantly lower an athlete’s cortisol levels after one hour of intense exercise.

Lowering an athlete’s cortisol levels more quickly after exercise gives the muscles an opportunity to repair faster and help prepare an athlete for the next workout.

Meanwhile, research published in the Journal of the American Dental Association finds that wearing an ArmourBite® mouthpiece improves endurance, exercise intensity and recovery.

“Our initial research showed an improvement in endurance, but this latest study identifies the exact gas exchange mechanism that was contributing to those positive results,” said Dr. Dena Garner, head of the Department of Health, Exercise and Sports Science at The Citadel. “These endurance findings are significant for any athlete, but particularly those involved in endurance sports such as running, triathlons, football, hockey and soccer.”

How does it work? The mouthpiece creates a small separation between the lower and upper teeth, while shifting the jaw down and forward. This re-positioning has been proven to help reduce cortisol and lactate levels.

What’s more, here at Gladstone Family Dentistry, we can make a custom mouthguard that will benefit any athlete in your family. So if you have a high school or college athlete in the family, share the knowledge!