Fall in Love with these 5 Foods for Better Oral Health 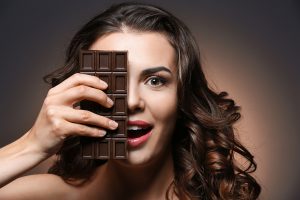 We’ve all heard the phrase “you are what you eat”, and it’s as true for your oral health as it is for the rest of your body! Most of us are aware that sugary treats, starches, carbonated soft drinks and other foods can lead to unhealthy teeth and gums, but did you know that there are also certain foods that actually help keep your mouth healthy and happy?

Go ahead, do your happy dance!

As Valentine’s Day approaches, so does that ubiquitous heart-shaped box of chocolate. And it’s okay—you’re not the only one that demolishes it within 48 hours! (Not that we’re admitting to it.)

Now, if that shiny red box is filled with chewy, gooey milk chocolate caramels, try to go easy and brush, rinse and floss afterward. After all, most milk chocolate is loaded with sugar, and sticky sweets tend to adhere all too easily to teeth, creating a breeding ground for plaque build up and cavities.

Dark chocolate, however, is your superhero—as long as it’s at least 70% cacao. Studies carried out by researchers at Osaka University in Japan, as well as at the University of New Orleans and the Louisiana University School of Dentistry, have shown that the compounds in cocoa bean husks actually counteract the damaging effects of sugary foods, fighting off bacteria that would typically feed on the sugars and produce plaque. In fact, these studies suggest that dark chocolate may even be more effective at fighting tooth decay than fluoride!

According to a study conducted by Dr. Yoshihiro Shimazaki of Kyushu University in Fukuoka, Japan, regular consumption of green tea may help promote healthy teeth and gums.

The study, which was published in the Journal of Periodontology, indicated that the presence of the antioxidant catechin in green tea might be responsible for its beneficial effect on oral health, due to its ability to reduce the body’s inflammatory response to periodontal bacteria.

According to the American Dental Association (ADA), fiber-rich foods have a cleansing effect on your teeth and gums. This is because chewing fibrous foods “scrubs” the teeth and stimulates saliva production, which helps neutralize acids that can damage tooth enamel while restoring minerals.

You can get this awesome cleansing action by eating plenty of fresh, leafy greens (think spinach and kale) as well as foods like carrots, apples and celery.

Raw almonds not only pack a protein punch, but they also provide calcium and crunch to help keep your teeth strong and clean. They’re great as a snack, sprinkled over oatmeal, tossed into stir-fry or used as a salad topper.

Almonds are also delicious mixed into yogurt, which is high in calcium, protein and probiotics, which are beneficial to your gums by fighting unhealthy bacteria.

Used medicinally for centuries because of its many health benefits, ginger root is powerful at fighting gum disease. According to recent studies, including one from Korea University, ginger extract contains anti-microbial properties that kill bacteria in the mouth, reducing tooth decay. It’s also a natural anti-inflammatory, protecting against periodontal diseases that can lead to the loss of tissues and bone in the mouth.

Sliced or minced ginger is wonderful in carrot soups, hot tea and stir-fry and well as paired with fish.